The 100% owned FG Gold project is located in the Cariboo region of British Columbia and is easily accessible by gravel road. The property demonstrates a promising mix of high and low-grade gold ribbon veins in an orogenic setting; and porphyry style mineralization. 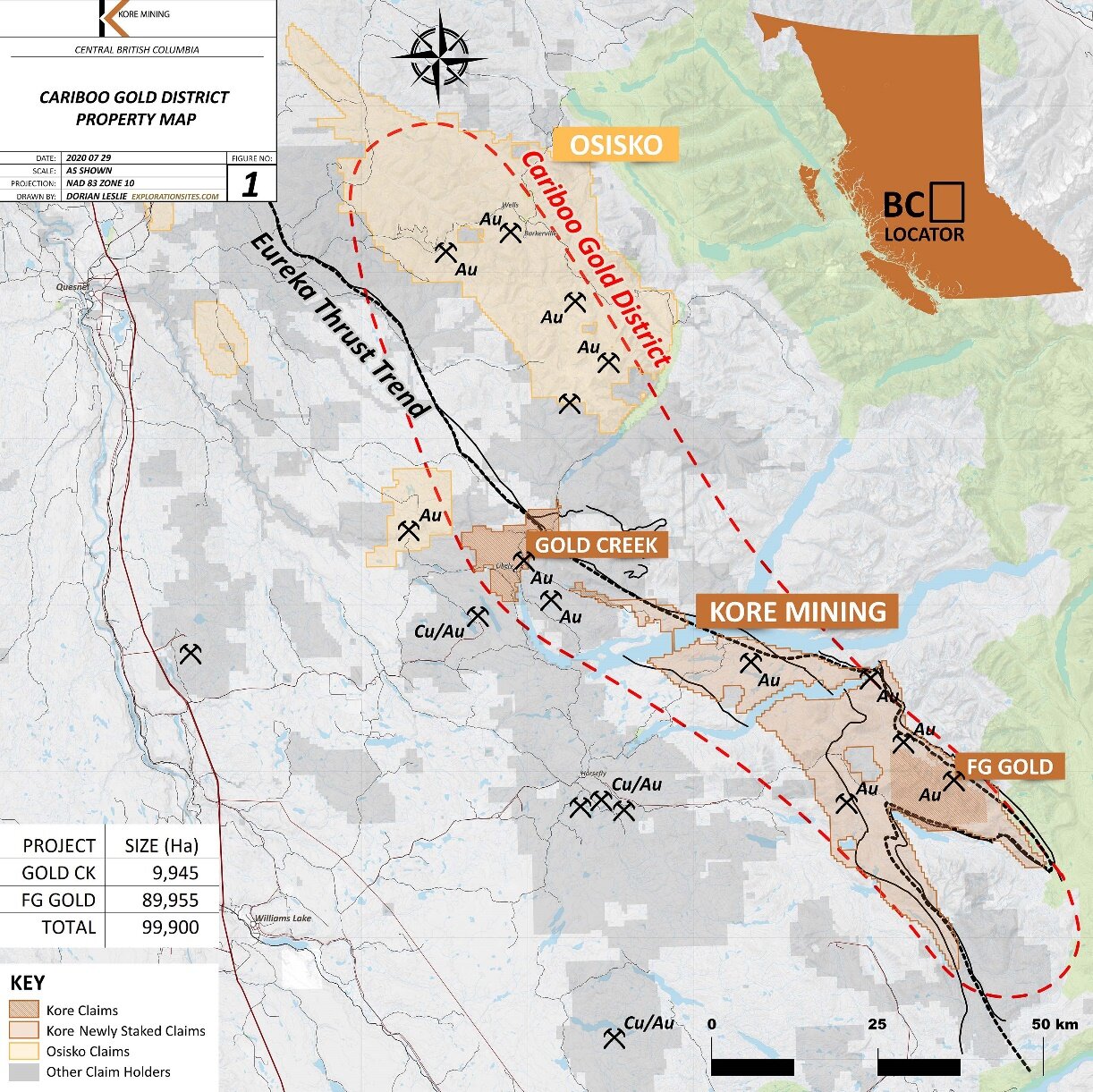 The 100% owned FG Gold project is adjacent to and on strike with a large, NW-SE trending gold-bearing zone that includes the Gold Creek discovery and the Spanish Mountain projects to the northwest. The property demonstrates a mix of high and low-grade gold ribbon veins in an orogenic setting at the Main Zone and porphyry style mineralization northwest of the Main Zone.

FG Gold is easily accessible by gravel road. To date, over $15.0 million of exploration work has been completed on FG Gold, establishing the Main Zone gold resource which extends over a 3 km strike length. There is an additional 10 km of under-explored strike length on the property. 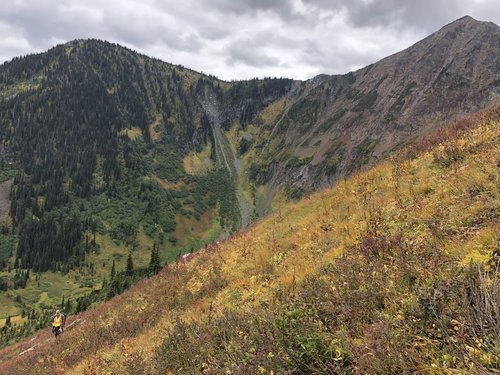 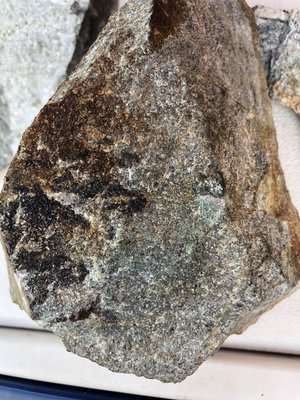 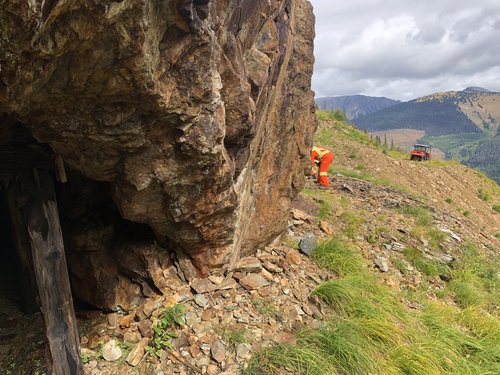 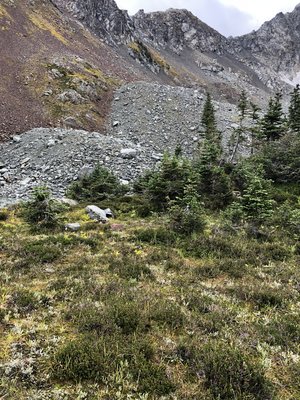 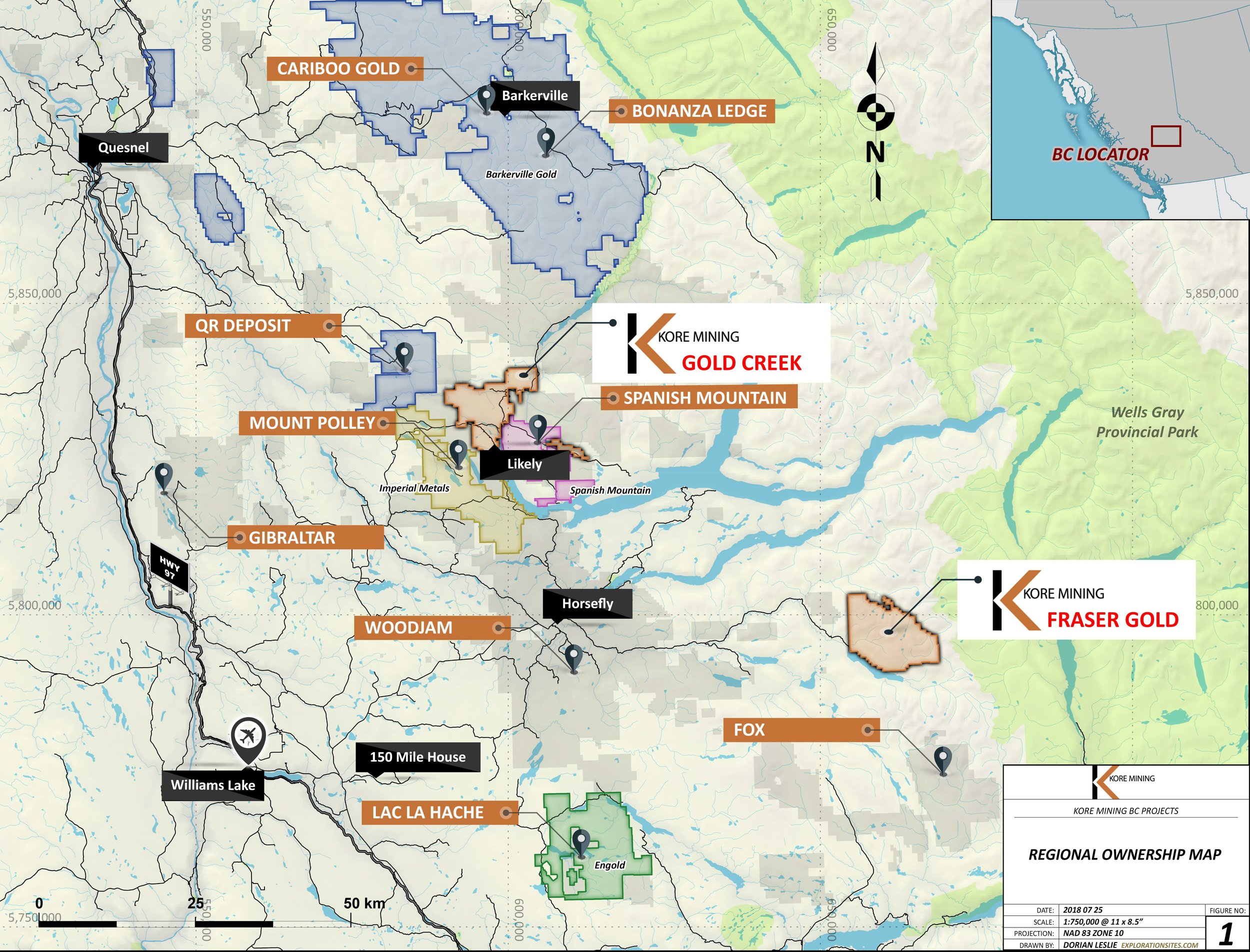 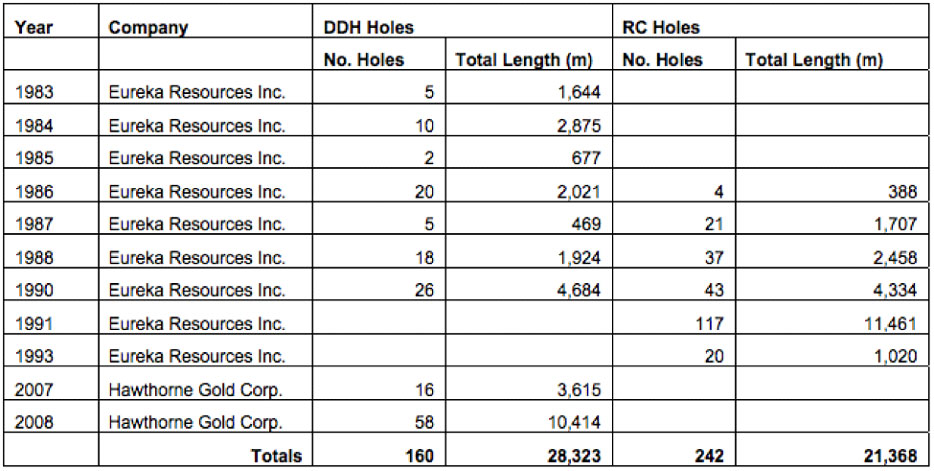 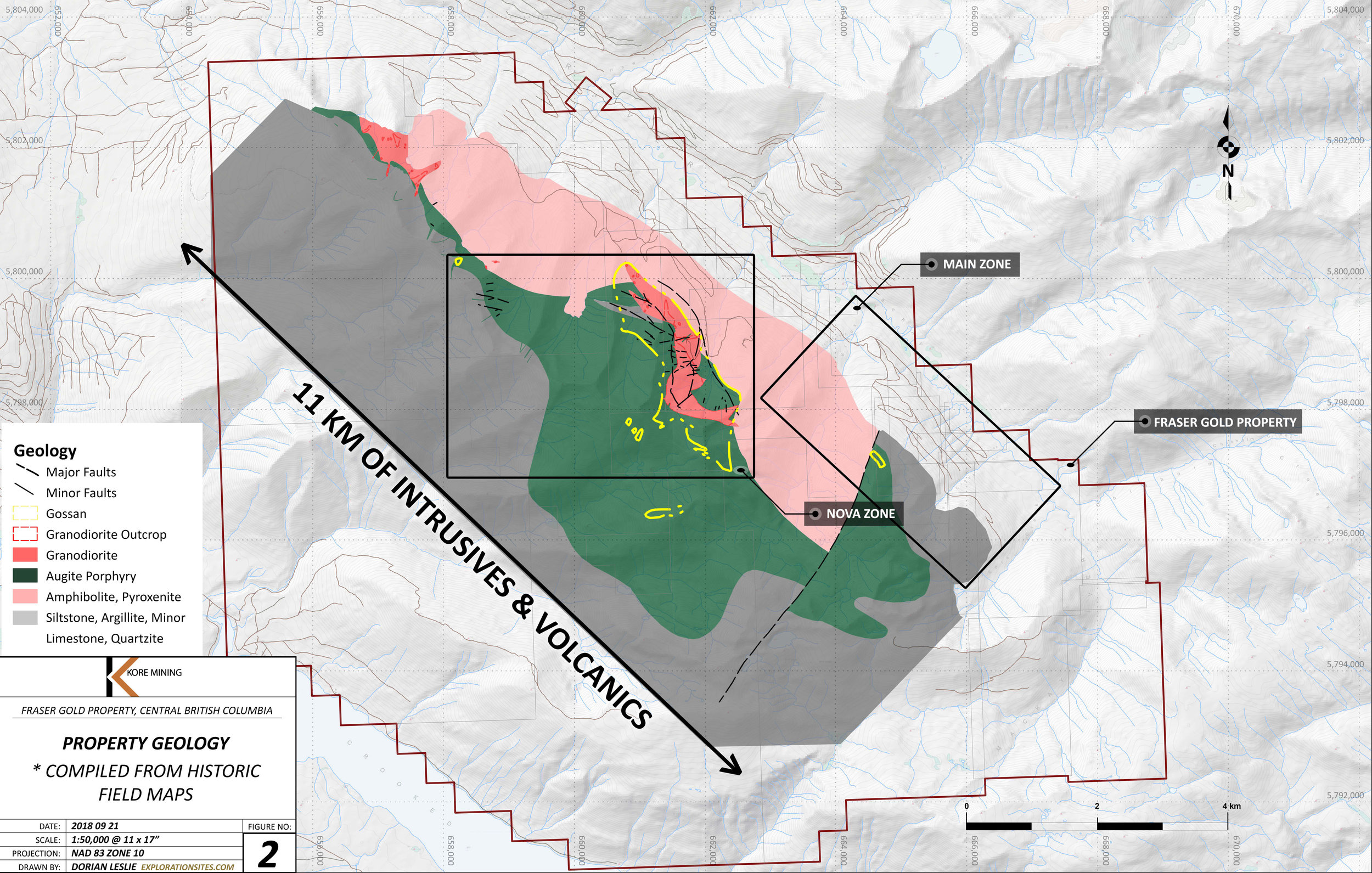 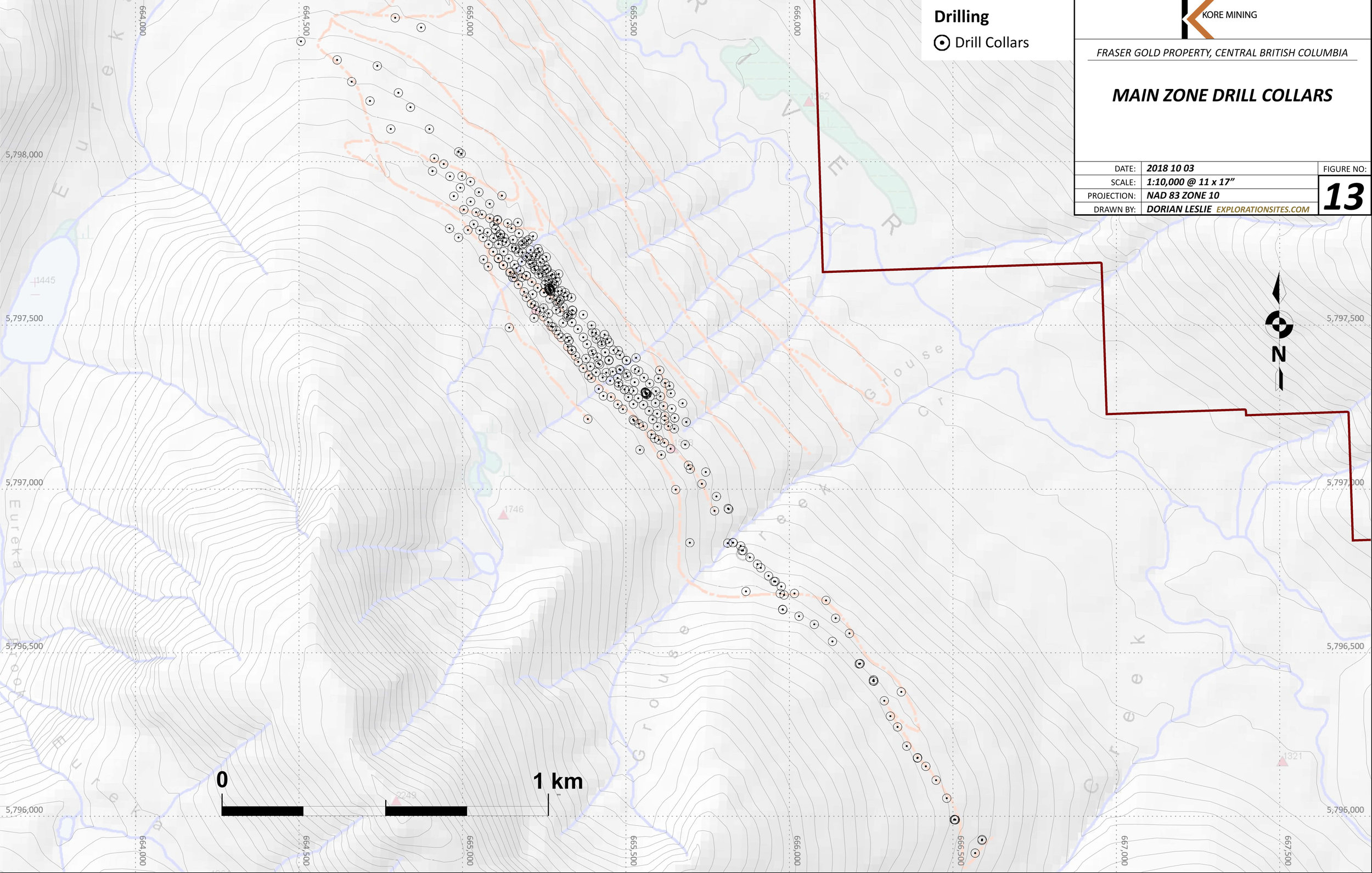 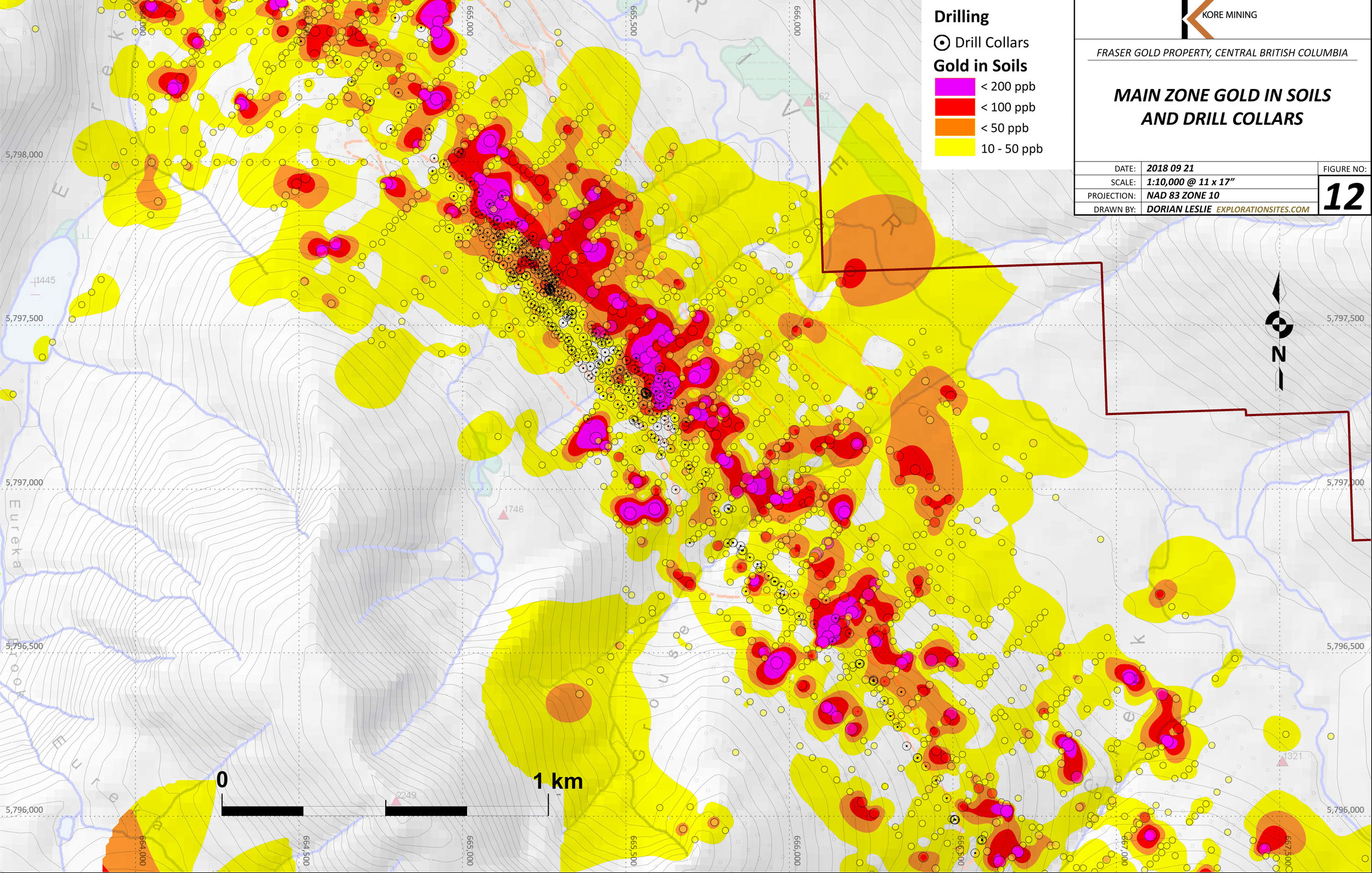 The FG Gold Property is placed in the class of orogenic style of mineralization. World class gold deposits of this type in metamorphic terranes are generally 2 to 10 kilometers long, contain 2 - 5% sulphide minerals and have gold to silver ratios from approximately 5:1 to 10:1. Examples of this deposit type include Kirkland Lake, Hollinger-McIntyre, Campbell-Red Lake and Bralorne-Pioneer camps. The deposit type has worldwide significance, accounting for 12 of the 32 gold camps in the world having production or resources exceeding 600 tonnes of gold or approximately 19 million ounces (Rhys and Lewis, 2004). There are at least two other similar gold occurrences along the eastern margin of the Quesnellia terrane in central British Columbia; at Spanish Mountain, about 54 km to the northwest, and at Hixon, about 180 km northwest of the FG Gold property. The Spanish Mountain occurrence is currently being explored and developed by Spanish Mountain Gold Ltd. The main mineralized zones consist of gold-bearing veins and stockworks in a pyritic and graphitic shaley siltstone.

This occurrence differs in at least two respects from that at FG Gold; one, is that strong carbonate-silica-pyrite alteration, described as listwanitic by Bloodgood (1990), is pervasive. The second is that mineralization probably post-dated the regional metamorphism (Bloodgood, 1990). 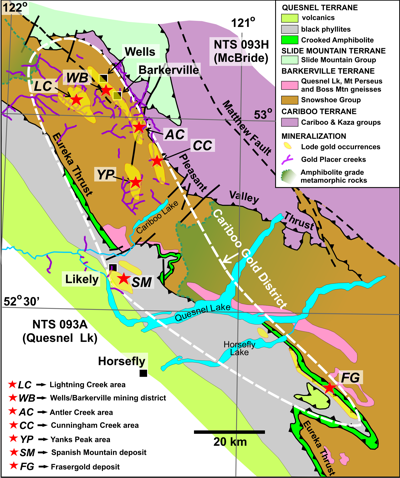 The FG Gold property straddles the boundary between two major tectonic belts of the Canadian Cordillera: the Omineca Tectonic Belt lies to the east of the property and the Intermontane Belt on the west and central portions of the property. Three regional tectonostratigraphic terranes are present; Kootenay, Slide Mountain and Quesnellia terranes. The Omineca Tectonic Belt is noted for its prevalence of gold and tungsten mineral occurrences such as the Barkerville gold mining camp to the north. The Quesnellia terrane is noted for a prevalence of copper, gold and molybdenum mines and showings, such as those at Highland Valley, Boss Mountain, QR and Cariboo Bell - Mt. Polley (Panteleyev et al, 1996). The dominant structures in the region are the northwest trending, shallowly plunging, Eureka Syncline and Perseus Anticline (Campbell, 1971). 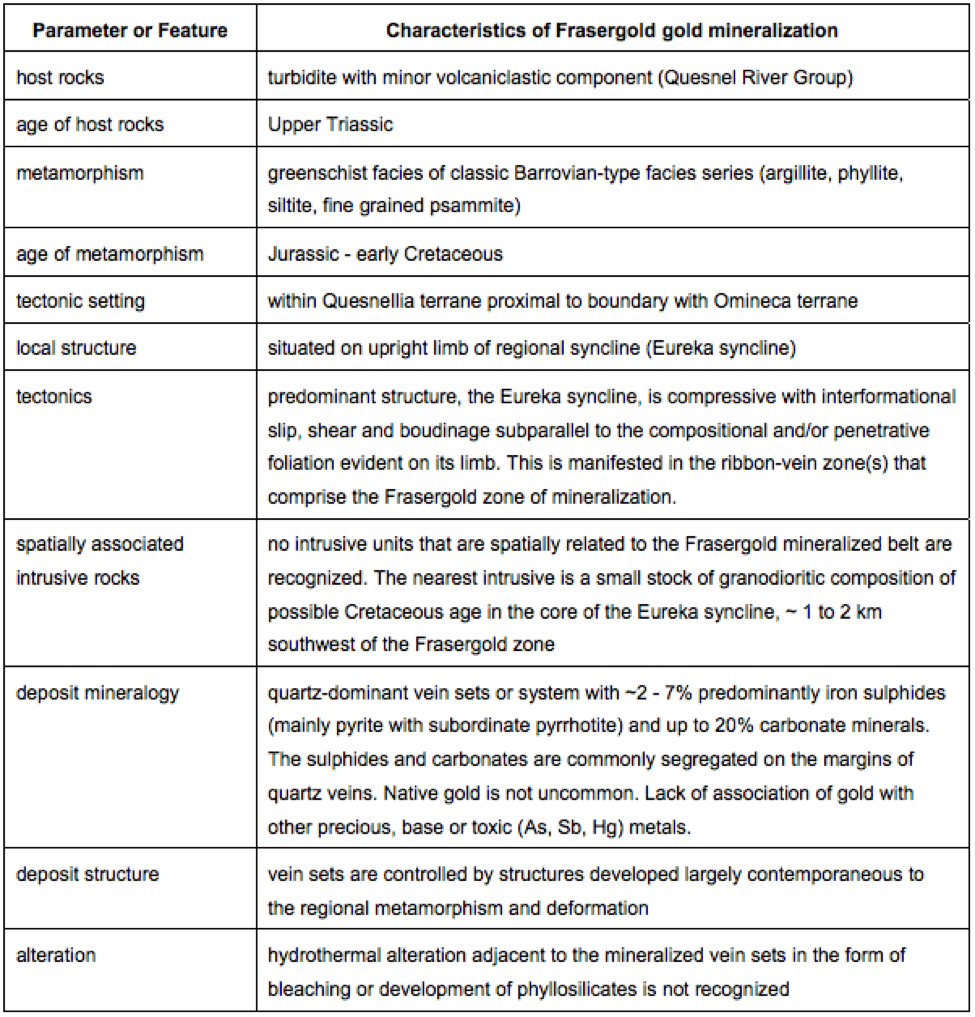 The table above outlines the characteristics of the FG Gold deposits as well as they are known.

The property is located within the middle to upper Triassic Quesnel River Group and is underlain by a thick sequence of dark grey to black; lustrous phyllites with iron-bearing carbonate porphyoblasts, locally referred to as the “knotted phyllite”. The knotted phyllite contains minor intercalations of grey phyllite, thin lenses and layers of light grey massive to phyllitic siltstone and thin lenses of grey silty limestone. Underlying this sequence is a grey silty and locally calcareous phyllite. At the base of the knotted phyllite unit in the Northwest extension area of the FG Gold property lies a unit of pale carbonate-quartzsericite-chlorite schist which are possibly metavolcaniclastics.***

Gold mineralization at the FG Gold property is classified as an orogenic lode-gold deposit type. Lodegold deposits generally occur in metamorphic terranes delineated by a regional fault system. The deposits are often regularly spaced along a zone hundreds of kilometers long, although economic ores may only be present over a short distance. Many of the most productive ore bodies of this type exceed one kilometer in vertical extent with little change in gold grade with depth (Goldfarb et al, 1986). There is a spatial association of this type of gold deposit with greenschist grade of metamorphism, possibly due to the large fluid volume required during the amphibolite and/or greenschist transition (Goldfarb et al, 2005). 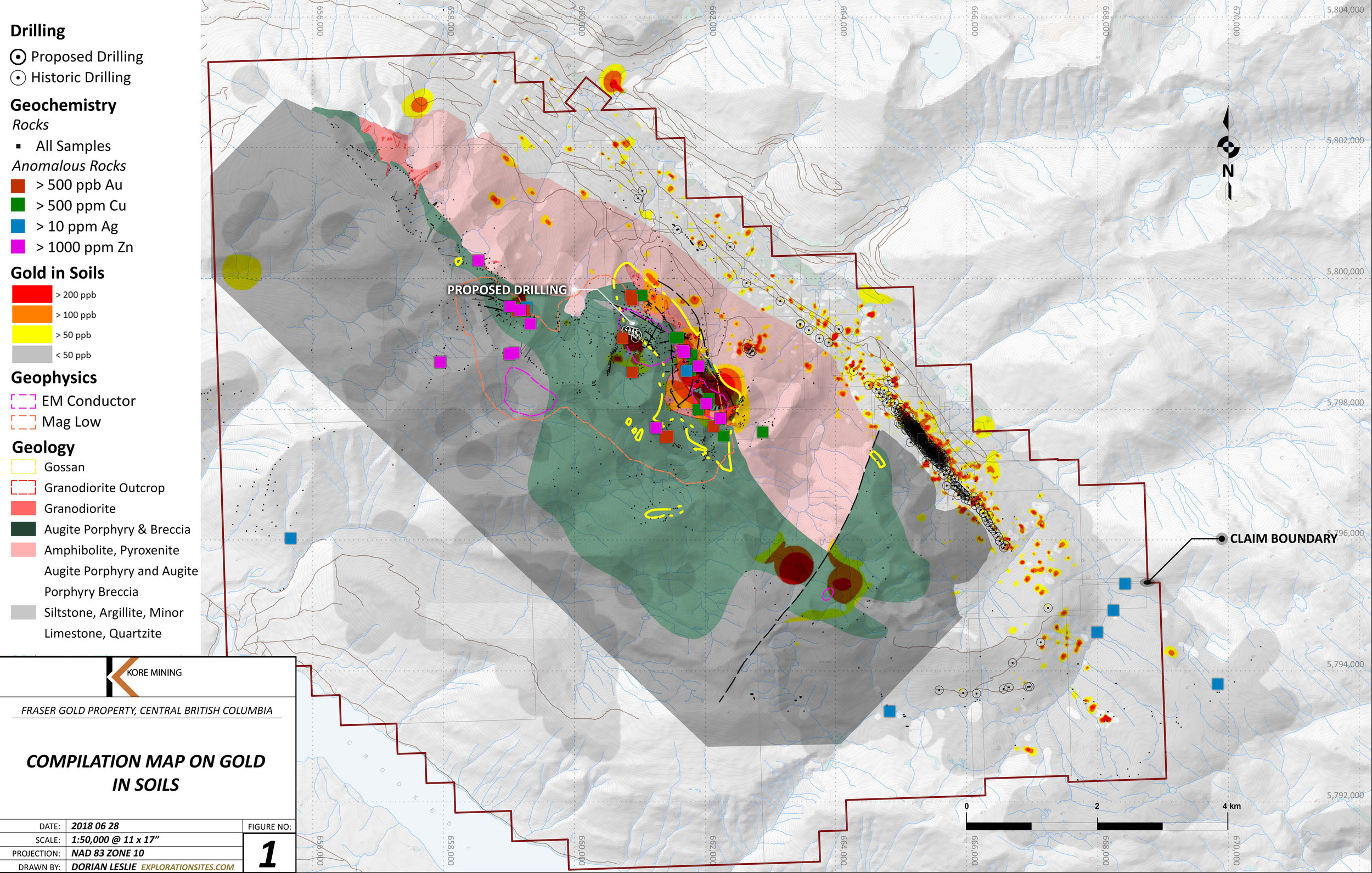 Gold mineralization on the FG Gold property occurs within, or is spatially associated with, sets of white quartz + Fe-carbonate + muscovite + pyrite veins that are developed in the knotted Fe-carbonate porphyroblastic carbonaceous phyllite unit. The veins form complex sets and networks that are developed in concentrated zones several meters to tens of meters wide. Zones of veining are generally stratabound and overall have shallow to moderate westerly dips. Apart from the presence of the carbonate porphyroblasts in the knotted phyllite unit and widespread Fe-carbonate alteration of siltstone and sandstone lamina which extend well outside the immediate areas of veining, no visually obvious alteration affects the host phyllitic sediments at FG Gold in areas of gold mineralization, although slightly elevated disseminated pyrite content was observed near some veins (Rhys, 2007).